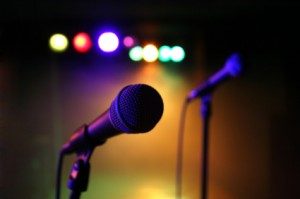 Afton was founded in 2004 by a small group of Portland musicians struggling to find venues to play shows. “We were deeply passionate about our music, all we wanted was to share our work, but struggling to find ways to share our passion with fans and build our overall fanbase. Afton was founded on the belief that if an organization existed to give artists a launchpad, then artists can focus on engaging their fans and playing shows. Everything we have done since has been with that goal in mind.” Afton operates on a few simple principals: we facilitate connections between artists and venues, we ask our artists to sell at least 15-20 tickets per show to guarantee some audience attendance, and we follow fairness policies related to ticket sales. We don’t play favorites- your fanbase and ability to draw an audience creates merit for which we reward with more show opportunities. No favoritism, no politics. “Just push play.” Since 2004, Afton has booked over 75,000 local acts (roughly 200,000 band/group members), on over 10,500 Afton concerts, in over 55 cities, and worked with over 500 music venues. Afton is now the largest Booking Agent and Promoter of unsigned, independent local bands and rappers in the country.

“No one would let our band play,” explains Ryan, “that was pretty much it.” Thus, the reasoning behind the creation of the company was just that simple. “If the club owners were too busy to give time to local unsigned bands like us, we figured we better start putting on our own shows, doing all of the booking work, and taking on all financial risk ourselves. So that’s what we did.”

Faded was getting tired of just playing dive bars, barbecues, school dances, and fundraisers. They wanted to play real, legitimate music venues where they would see their favorite national tours play. We know firsthand how hard it is to take your band or rap act from the garage into the nicer venues in town. This is why Afton booking exists. We want local bands as well as local rappers to have a reason to get better, a reason to practice every single week, and nothing is a better motivator for that then getting live shows at legit music venues in town.

After many calls, emails, and press packs over several months, Kintz finally happened to catch the owner of famed local venue, The Meow Meow, on the phone – thanks to a somewhat desperate, late-night attempt to reach someone by phone. “He told me that there were no openings on either of his two all-local shows next month,” recounts Kintz. “He said that the only shows on the calendar that were still being booked were small and mid-sized tours coming through town, and he explained the opening slots for those would go only to local bands with established draws of more than 75-100+ fans per show.”

After an hour-long discussion, the club owner admitted that Faded’s only chance of getting a show that month at his venue would be for Kintz to book the show himself, do all of the legwork, run the show, and to personally take on all financial risk that night! “Despite the criticism we heard from other booking people in town, we liked our music and so did most of our friends, so we figured we’d give it a shot.” Explains Ryan, “Booking the show ourselves was a ton of work – to say the least – and the constant stress of knowing we were personally responsible for all financial overhead of the show made things even crazier. We had our entire band fund sunk into that first show, and if attendance sucked we basically would have lost all of the money we had personally saved up the past 12 months as a band.”

“We didn’t really have any other option, so we promoted like crazy and we had a packed out show, it was amazing.” After that first show, Ryan produced one show per month for almost an entire year – giving Faded consistent opportunity to put their plan into action. “After we’d done about 10 shows, the club owner explained that due to the venue moving to a bigger location, and business being slow, the club might have to close – unless we could somehow start booking 4-5 more shows per month,” says Kintz. “We offered to give it a try, because if this club closed down, it would be disastrous for Todd, our band, and all of the local bands we had become friends with – including the touring bands that would come through.” So, out of necessity, Afton was born.

Faded broke up in mid 2005 (when their drummer/producer chose to leave the band to start a family), but not before Faded became the highest drawing Afton artist of all time, still to this day.

More than 250 Faded fans came out specifically to see Faded play their CD Release show for “Take Me Anywhere,” and gave Ryan and his band members the experience they had initially set out to create so many years before – “a real stage with a ton of fans in front of it.”

“We were sad to see Faded come to an end, but the fun we had and work ethic we learned from being in that band were priceless,” says Ryan. Afton was born out of the belief that every artist deserves the opportunity to create a similar experience for themselves.

“Local artists deserve attention, and they deserve an outlet to play live and build their fan base. Period. That is why we exist, that is why we have worked so hard at doing the best we can for our artists, and that is why we will always be an extra option that all local artists have for shows. Every month, year round.” – Ryan Kintz

Our purpose is to give a risk-free booking option to independent unsigned bands, solo acts, and rappers. We believe that local music is the ground floor of the music industry. Every major national artist started out local. Your favorite band started out as a local band, and if local musicians cannot easily book shows at the venues they want to play, their artistic potential will be squelched out before they even have the chance to succeed. Local musicians cannot grow if they are not given opportunity to play live at legitimate music venues. It is our purpose to help local musicians achieve their goals by offering them free promotion resources and by booking them on our shows.

We cannot book every act that approaches us, but we do review and consider each artist that contacts us for booking. Afton wants to see each artist achieve their own definition of success, and whether through our live opportunities or our online promotion resources, we strive to help as many artists as we can.

What Need Does Afton Fill?

No matter how good your songwriting, musicianship, execution, and stage presence is, the club you want to play at might not book you. This is the harsh reality. Commonly, clubs are understaffed and tend to focus their booking staff on national acts and larger tours. In fact, many times they will ask local artists to not even follow up about a booking submission for 6-8 weeks. Local acts many times get lost in the shuffle and fall to the wayside.

This is the void that Afton helps fill – to provide year round show opportunities to our Artist Roster each and every month – to provide more options for you to play live and clubs that may be out of your reach.

Afton specializes in supplementing what clubs are already doing, by opening up opportunities for artists that the club’s booking staff is either too busy for, or unwilling to take a risk on. Unfortunately, local artists as a whole have a reputation of drawing very low and being flaky. Venue owners know this, and that is why the nicer clubs in town are very selective on who they are willing to take a risk on. Afton bridges that gap between local artists and the venues.

For the most part, the absolute best local bands in your city, the top 1%, already have an “in” with the best clubs in town. But that still leaves hundreds if not thousands of good, hard working local bands that cannot get the venues they want to play to return their phone calls.

When a local artist is not getting as many quality shows as they want, it’s usually due to the lack of connections, not lack of quality or value in the music they’ve created. We are here to be that connection. Our founders hated being on the outside of an often very exclusive industry. That’s why Afton was created to provide artists with more show options each and every month and give them the opportunity to showcase their talent and their music onstage.

We'll get send your message to the right department. Select who you want to email from the dropdown below.